We have a small herd of European forest reindeer in our collection, one male & two females.  Forest reindeer are slimmer & taller than tundra reindeer.

They can be seen at our reserve viewpoint in Wolf Wood, next to the wolves. 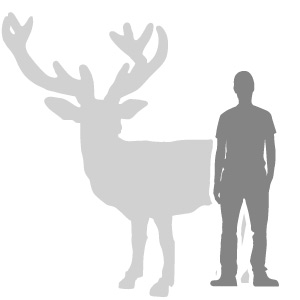 The latest IUCN figures refer to the whole forest reindeer population. This population is stable and was last assessed in June 2008

There are a number of different subspecies of reindeer and all are well adapted to a life in the extreme conditions of the north.

Reindeer are most commonly found in North America, known as caribou, Norway, Sweden, Finland, Greenland and Russia. They live on the grassy plains of the Arctic and sub-Arctic as well as coniferous forest.

To help them cope with these cold condition their coat is made up of a thick, woolly under layer, and an overcoat of stiff, hairs which trap a layer of insulating air. Although their coat can vary in colour with location they are normally brown to grey on the upperparts, and pale to white underneath.

One of the reindeer’s great adaptations are their large, flat hooves, which act like snow shoes in the winter, and help to provide stability over soft ground in the summer. During autumn, the hooves harden and develop sharp edges which they use for breaking through snow and ice when searching for food. Hair between the toes of the hooves prevents snow from clogging them up.

Both the male and the female reindeer possess antlers which are re-grown each year, and they are the only deer species where this occurs. Unlike horns which grow from the base, antlers grow from the tip, rather like the branch of a tree. Typically the antlers are used by both sexes as a form of defence. The male will also uses his to fight other males over a mate.

Mating occurs mainly in October, and the female usually gives birth the following May or June, after a gestation period of 227 to 229 days. Normally a single calf is born, although twins can happen. The young reindeer can follow its mother after an hour of being born. Unlike many other deer species, the young reindeer does not have any spots when it is born. The young are weaned after around six months.

Reindeers are a gregarious animal and live in herds up to several hundred strong. Their diet consists of lichens, mosses and grasses. Extraordinarily, reindeer can see ultraviolet light which also helps them to find food during the winter.

Reindeers have a number of natural predators, including wolves, bears and wolverines, therefore they have developed the ability to run fast, they can reach speeds of 60 to 80 kilometres per hour.

Although reindeers in general may not be considered to be globally threatened, it is hunted extensively for its meat, fur and antlers. Hunting of the reindeer is now strictly controlled in Norway and Russia, although poaching still occurs.

The European forest reindeer are much rarer than the common or domestic reindeer and are part of a conservation breeding programme supporting the remaining wild population in Finland.