We have a small herd of white-lipped deer at the Highland Wildlife Park.

They can be seen on the way to our female polar bear viewing area.

They currently face threats from human agriculture, competition from domestic animals such as sheep, goats, and yaks. It is also hunted, for meat, antlers, and other body parts (such as the velvet) used in traditional Chinese medicine.

White-lipped deer occur in two protected areas in the Qinghai Province, and are classed as a protected species in China. Further conservation actions have been recommended, for this species. 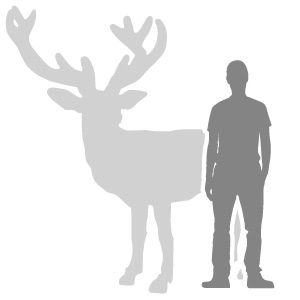 White-lipped deer (Przewalskium albirostris)are also known as Thorold’s deer and are generally found in grassland, at high altitudes in the eastern Tibetan Plateau. They are known as the white-lipped deer due to the white patches around their muzzles.

Their hair is coarse and grey-brown over most of the body, fading to yellowish buff on the underside, with a distinct reddish-brown patch on the rump, and a ridge of darker hair running down the spine. During winter, the coat is paler, and about twice as thick as during the summer. The head is darker than the rest of the body, especially in males, and contrasts with pure white markings on the lips, around the nose, and the throat.

Adults have antlers, measuring up to 1.4m in length, and can weigh up to 4 kilograms (8.8 lb). They are shed annually in March, reaching their full length by late summer. Other distinctive features include longer ears than most other deer, lined with white hair and a much heavier body.

They tend to live in herds, grazing on grasses and foliage from shrubs. They also have a range of vocalisations, including loud alarm calls, which are audible over 500 metres away.

The rut normally occurs between September and November, when herds containing both males and females become more common. Males compete with one another in a similar manner to other deer; wrestling with antlers, scent marking, visual displays, and grunting warning sounds.

The female gives birth to a single young after a gestation period of 220 and 250 days, typically in either May or June. The calves are born with white spots, and able to stand within about 40 minutes of birth. Initially, the mother protects them by moving them between different locations, only visiting them twice a day to allow them to suckle. After about two weeks, they re-join the herd. The calves' spots begin to fade after around six weeks, and they attain the full adult colour by the end of their first year. However they don't become sexually mature until their second or third year.