See the free ranging wild red squirrels at our feeding station in the Forest Habitat and the reserve viewpoint at Wolf Wood. Up to a dozen different red squirrels visit for food every day.

For sightings of red and grey squirrels throughout Scotland, contact the Scottish Squirrel Survey: http://www.scottishsquirrelsurvey.co.uk/ 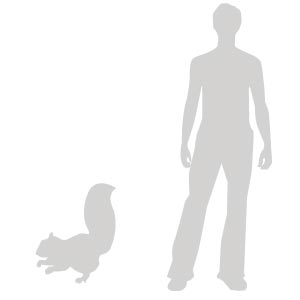 The European population is decreasing, IUCN last assessed in August 2016 (classed as Critically Endangered in the UK)

The red squirrel has a chestnut upper body, with a cream underside, noticeable ear tufts and a fluffy tail, which is almost the same length as its body. The red squirrel moults its coat twice a year but the ear tufts and the tail are only moulted annually. It is a smaller animal than the introduced grey squirrel, with a body length of 20 – 22cm.

Red squirrels are found in mixed broadleaf and coniferous woodland and have quite a varied diet including seeds, flowers, leaves and fruit. They will also sometimes eat insects, fungi and birds' eggs. They are active during the day, foraging for food and they do not hibernate in winter. Instead they hide stores of food to see them through periods when fresh food is not available. Predators include wildcats, pine martens and birds of prey, but they are more likely to die from starvation, very cold weather and disease.

Red squirrels build nests, called dreys, from sticks and moss placed high in the branches. They can sometimes produce two litters of three to four young a year, between March and July.

Globally, there are many different species of squirrel, but there is only one native to Britain and that is the European red squirrel. They are very rare now in the UK, with over three-quarters of the remaining population found mainly in small pockets of woodland in Scotland.

They are facing extinction from two sides. Firstly, the introduced, larger eastern grey squirrel from North America has displaced the reds from most of their former range by outcompeting the reds for territory and food supply. Secondly, the grey squirrel carries and spreads the lethal parapox virus to red squirrels, which the greys are immune to. Fortunately there is a growing interest in the plight of our red squirrel and you can also help by reporting sightings of red and grey squirrels. 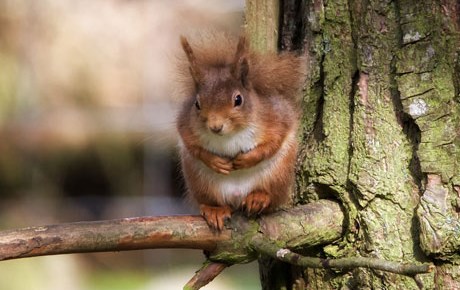