We have a small herd of Mishmi takin.

They can be seen in our Entrance reserve or on your way to Wolf Wood.

Very little information is available on wild takin populations, partly due to the inaccessibility of their habitat. They are at risk due to habitat loss, competition with other species and hunting for the traditional medicine trade.  Mishmi Takin are native to India, Myanmar and the People's Republic of China.

There is a sizeable captive population and the European Studbook (ESB) for this species is managed by RZSS. 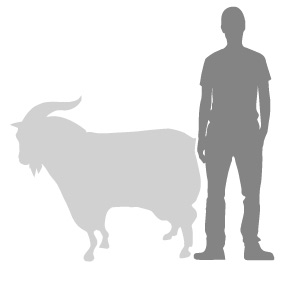 There are three different subspecies of takin and the Mishmi takin (Budorcas taxicolor taxicolor) are found in India and Myanmar. The Bhutanese population was thought to be a fourth subspecies, but genetic testing done by RZSS indicates that they are also the Mishmi form.

They are one the largest of the goat-antelopes and were thought to be related to the musk ox of North America and Greenland, but genetic testing shows that they are more closely related to sheep. In addition, the mythological 'golden fleece' is believed to have come from the takin's golden coat.

Takin have a number of features which help them survive in their mountain home. They have a long nose like a moose and this has large sinus cavities where air is warmed up before it reaches the lungs. This stops heat loss from the simple act of breathing. Takin do not have skin glands but their body secretes an oily, strong smelling substance, which covers their coat to protect it from moisture and rain. They also have stout horns that are ridged at the base and can reach up to 64 centimetres in length.

They forage in the morning and late afternoon and their diet includes alpine plants and evergreens such as rhododendron, the bark of trees and bamboo. Using their powerful bodies, takin will push over saplings to reach the leaves and they will also browse standing on their hind legs.

In spring and early summer, they gather in large herds of up to 300 animals when food is plentiful. In the autumn months, when food is scarce at higher altitudes, herds separate into smaller groups of up to 30 individuals, and move to valleys further down the mountains. These groups are made up of females, adolescents, calves and some adult males. Older males usually remain solitary throughout most of the year, but gather with females during the breeding season.

After a gestation period of seven to eight months, the female takin gives birth to a single calf. Within three days of their birth, a calf is able to follow its mother over rough terrain so they can evade predators and travel to food sources.

The lifespan of the takin is estimated at fifteen years with adults having only two natural predators, the wolf and tiger.