We currently have two males in our collection, Roger and Lyra.

Our Eurasian eagle owls can be seen in the enclosure between the northern lynx and the snow leopards.

During the 20th century the Eurasian eagle-owl underwent a significant decline in Europe due mainly to human persecution. However pesticide use, collisions with vehicles, barbed wire and powerlines have all played a part. Diseases such as myxomatosis and viral haemorrhagic disease which have severely reduced rabbit populations in some areas, have also had knock-on effects for the Eurasian eagle-owl.

In recent years their populations have started to recover to some extent as a result of improved protection, extensive reintroduction and restocking programmes, and the species is not currently thought to be globally threatened, although illegal persecution still occurs, and the population remains below previous levels. 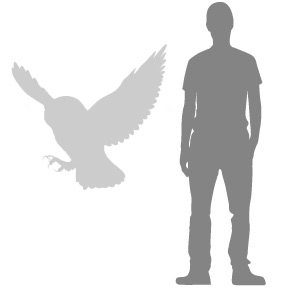 The Eurasian eagle-owl (Bubo bubo) is considered to be one of the largest owls in the world, with a wingspan of nearly two metres. These giant birds weighs between 1.5kg – 4kg and have an impressive wingspan of 155-180cm.

They are quite variable in appearance across their range, with a number of subspecies recognised, which differ in size, colouration, and the strength of the dark markings; ours are the nominate form from northern Europe.

They have beautiful markings with distinctive, prominent ear-tufts, which have a flap of skin at the front which can be raised to enable the bird to hear sounds from behind, a barrel-shaped body, and large gleaming orange eyes. Their plumage is buffy-brown and heavily mottled and streaked with black, with paler underparts and fine barring on the belly and flanks. The wings and tail are marked with dark bars.

The Eurasian eagle-owl has a very distinctive call with the males producing a deep, booming ‘ooo-hu’, while other vocalisations include a quiet, rasping chuckling, and a bark-like scream given by the female.

These owls spend their days roosting under cover, either in a tree, on the ground under a dense bush or on a sheltered rock ledge. They are most active at dawn and dusk and use a powerful, fast flight to hunt their prey. They may also search rock crevices for roosting birds, taking both adult and young birds from nests, or even drop into water to capture fish. Their diet consists mainly of mammals, including adult hares, young deer, as well as birds such as herons and buzzards, along with fish, reptiles and amphibians occasionally.

Breeding usually begins in late winter and their nests can be found on a sheltered cliff ledge, in a cave or in the old nest of another large bird species. Normally between one and five eggs are laid, which are incubated by the female for 34 to 36 days, during which time the male brings food to the nest. The young chicks first leave the nest at around five weeks old, but can’t fly until they are about seven weeks. They will remain dependent on the adults for a further three to four months and will not leave until they are approximately 170 days old.