Here at the Highland Wildlife Park we have a male vicuna named Merino.

They can be found in the Main Reserve, with additional viewing on the walkway out to the female polar bear enclosure.

Vicuna were hunted almost to extinction for their wool and meat until the 1960s when Chile and Peru created protected national parks and stopped trade in vicuna wool. Since then, the population has steadily increased.

Despite this, the future of the vicuna is far from certain. The IUCN notes, "Conservation programmes and tight control at local, national and international levels are key for the conservation of the species. Given the degree of poaching, the development of captive management schemes, economic interests for hybridizing vicunas and alpacas, uncertainties about the impact of climate change on the already poor vicuna habitat, and the deterioration of grasslands due to overgrazing by domestic livestock, unless conservation actions are in place, the species’ status might decline again." 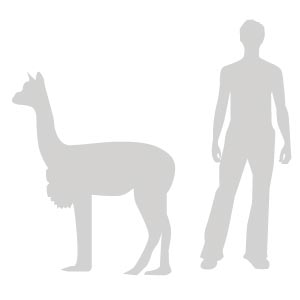 Vicuna (Vicugna vicugna) are the smallest member of the camel family, and are the wild ancestor of the alpaca. They can be found in Argentina, Bolivia, Chile, Equador and Peru, living on high, mountainous grasslands and plains. The environment is harsh, dry and hot during the day and freezing at night. Drought is also common which can make food scarce.

Due to the severe habitat in which they live, vicuna are specially adapted to survive there. Their coat is very thick and traps warm air, which is kept close to the body to keep warm at night. So they can move quickly over rocky terrain, the vicuna walks on the soles of its feet, which allows them to grip onto gravel and rocks with their toes so they don't slip.

Vicuna live in small herds made up of a dominant male, several adult females and their offspring. The male defends their range from other groups by fighting with the other dominant males. The male also protects the herd from danger; if vicunas feel threatened they take off quickly with the male placing himself between the group and the source of danger.

Their diet consists mainly of grass and like cows they chew the cud to get all the nutrients they can from it. To help them eat dry, tough grass, vicunas' lower teeth continue to grow through their life so they do not become blunt.

The dominant male mates with all the adult females in the herd and after a gestation period of approximately eleven months a single young is born to each female. Once born, the young can stand after only fifteen minutes and due to their mother's rich milk, they grow quickly. The young stay with the herd until they are approximately nine months old, after which both the males and the females are chased from the group. The young females then search for other herds to join while the males form bachelor groups until they can take over a herd of their own. 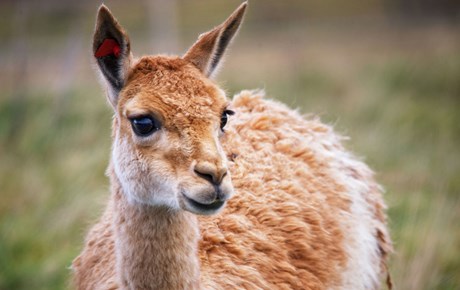