We have four camels, three females, Caramel, Dierdre and Dippy, and one male, Karnali.

They can be seen in our entrance reserve and from the walkway across it.

Wild Bactrian camels have been heavily hunted for meat and skin and as well as competing with domestic animals for water and food; they are at risk of extinction due to hybridising with domestic camels. As a result of this, only a few fragmented, pure-bred populations remain.

Some areas of the Gobi and Gashun Gobi desert (Lop Nur), where the Bactrian camel remain, are protected by the Great Gobi Reserve in Mongolia which was established in 1982, and the new national reserve ‘Lop Nur Wild Camel Reserve’ in China. A captive breeding programme based in Mongolia and run by the Wild Camel Protection Foundation began in 2003.

Camels can drink about 55 litres of water at once in order to replenish reserves they have lost. It is a common misconception that they store this in their humps, whereas in reality their humps are used to store fat.

Their feet are large & splayed to cope with walking on sand & loose surfaces. 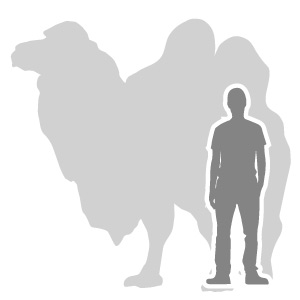 As with almost all Bactrian camels, the animals in our collection are the domestic variety. The true, wild Bactrian camel, (Camelus ferus), is a Critically Endangered species.

Wild Bactrian camels (Camelus ferus) are found in the Gobi desert of Northwest China and Mongolia.

The Bactrian camel is extremely well adapted to the harsh desert climate. They have dense eyelashes which help reduce the amount of sandstorm damage as well as narrow nostrils that can be closed tightly to protect against the storms. They have two toes that are connected with an unbroken sole, which allows them to spread their weight, giving the camel greater ability to walk on sandy ground.

Bactrian camels have the characteristic camel body shape, with a long curved neck, long legs, two humps and a split upper lip. These humps contain fat, not water which is a common misconception. They are used for nourishment when food and water are scarce and they can sustain the camel for up to four days. The coat of the wild Bactrian camel is normally lighter than its domestic relative and is a grey-brown colour. The coat allows them to withstanding great extremes of temperature, from -30 degrees Celsius in winter to +50 degrees Celsius in summer. In winter they grow long, shaggy hair, which is then shed in the summer in big sections as temperatures increase. Camels can also run very fast and reach speeds of up to 40 miles per hour.

Camels forage for food during the day and eat grass, leaves, grains and shrubs. They have very tough mouths, which lets them eat thorny desert plants.

Bactrian camels can drink as much as 57 litres at one time in order to replenish reserves they have lost. However when water is available they drink only to replace the water they have lost. To conserve water, camels produce dry faeces and little urine and allow their body temperature to fluctuate, therefore reducing the need to sweat. In addition to the water that is normally stored in the body, the Bactrian camel stores about 1.5 gallons in special sacks around its stomach.

Bactrian camels live in herds called "caravans" which will travel great distances in search of food and water sources. Each herd consists of between six to twenty animals and are led by an adult male. The group consists of adult females, their infants and juveniles. Females give birth to a single calf approximately thirteen months after mating. After only a few hours the infant camel can walk and will remain with its mother until it is around five years old. When they are approaching sexual maturity, males are driven out of the group to form bachelor herds while females remain in the group.