We currently have five Amur tigers, including a female called Dominika, who was born here in May 2009, and a male named Botzman who arrived in October 2020.

The pair welcomed three cubs in May 2021, two girls and a boy named Nishka, Layla and Aleksander.

Our Amur tigers can be found on the west side of the park behind the visitor centre. 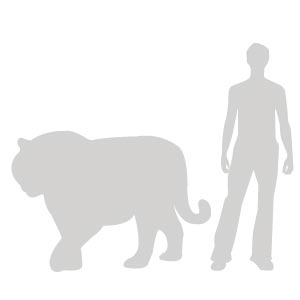 Tigers are easily distinguished from other large cats by their distinctive striped markings. They have a reddish-orange to yellow coat with a white belly and black markings. The characteristic dark, vertical stripes on the body are unique to each tiger with no two individuals exhibiting the same stripe pattern. They vary in their width, spacing, and length, and whether they are single or double stripes.

Their chest, throat, nose and inside of the legs are white and there is usually a white area above the eye which extends onto the cheeks. A white spot is also often present on the back of the ears, and the long tail is ringed with prominent dark rings.

Like the other big cats, the tiger is well adapted for hunting large prey, with short, heavily-muscled front legs and long, sharp, retractable claws which are kept hidden while resting or walking. Tigers are a 'stalk and ambush' predator, with its stripy coat providing excellent camouflage in tall grass and the forest. They hunt mainly at night and either kill their prey with a bite to the neck, breaking the spinal cord or biting the throat and suffocating the animal.

The Amur tiger’s wild diet includes wild pigs, deer and bears. Tigers stalk their prey, getting as close as possible before they pounce. Amur tigers have excellent colour vision and their night vision is five times better than humans. Male tigers will defend their territory from other males to ensure exclusive mating rights to the female or females that live there.

Unlike most other cat species, the tiger likes the water. They can often be found lying half-submerged in streams and lakes in the midday heat.

Amur tigers mate in the winter and the female usually gives birth to a litter of two or three cubs after a three and half month gestation period. When the cubs are born they are small, blind and helpless. The cubs grow quickly, increasing almost four times in size within the first month. They learn to hunt and kill from around one year of age but remain dependent on the female for at least 15 months, after which time they will disperse to find their own territory.

Marty gets his pre-Christmas weigh-in

The Amur tiger (Panthera tigris altaica) is the largest of all the big cats. Previously known as Siberian tigers, the Amur tiger was renamed in the 1990's as the last tigers had long disappeared from Siberia. They are now found only in isolated populations around the Amur river valley in the far east of Russia and on China's north east border. It is estimated that there are around 450 Amur tigers remaining in the wild and this population is under threat due to habitat loss and poaching, particularly to meet the demands of the traditional Chinese medicine trade.

There are six remaining sub-species of tiger: Amur, Indian, Malayan, Indochinese, Sumatran and South China. The Bali, Caspian and Javan tigers became extinct in the mid-20th century, and it is probable that the South China tiger is extinct in the wild.

In the past 100 years, the tiger has lost more than 93 percent of its range and only survives today in scattered and fragmented populations.

Thankfully, the Amur tiger breeds fairly readily in captivity with the bulk of the managed population in European and North American zoos. A member of the Highland Wildlife Park staff serves as the husbandry advisor to the European programmes for Amur and Sumatran tigers, helping other zoos with husbandry problems and enclosure design. The Amur tiger served as one of the models for the creation of scientifically managed programmes for species in captivity in zoos and aquariums worldwide. Sadly, there are now more Amur tigers living in zoos than in the wild.