We have two snow leopards at Highland Wildlife Park.

Our adult female Animesh was born in 2013 arrived from Marwell Zoo in England and our male, Koshi arrived in 2020 from The Big Cat Sanctuary.

The snow leopards can be seen behind the wolverine enclosure on the way up to the viewing area at the top of the hill in the walk-around section.

As a result of declining prey populations due to overhunting, snow leopards populations have declined. Due to the lack of food, snow leopards will often kill domestic livestock causing conflict with local farmers. A further threat to the species also comes from the increasing demand for bones for traditional medicine.

Today snow leopards are protected throughout much of their range and international trade is banned.

There are a number of organisations involved with the conservation of this species, covering many different areas including research and data storage, education, community-based conservation, and the protection of livestock to prevent retributive killing of snow leopards. Local people are also involved in various initiatives and there are plans to link fragmented populations by habitat corridors, which may improve the chances of the long-term survival of this secretive and endangered cat. 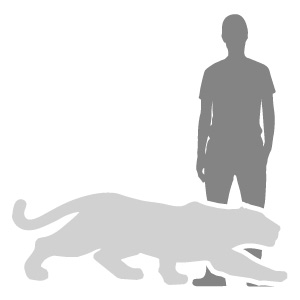 Snow leopards (Uncia uncia) have a white to grey coloured coat and patterned dark-grey to black rosettes and spots. To help fight the cold weather they have long, thick, fur with large paws and an enlarged nasal cavity that warms the cold air as it is breathed in. Their long, thick tail is almost a metre in length and is used for balance as well as insulation when wrapped around the body and face when resting. They are capable of leaping great distances and are particularly agile in their steep and rugged habitat.

Snow leopards can be found in the harsh, remote, mountainous areas of central Asia. The species’ range is an arc from Mongolia, down through central Asia, along the Himalayas and north into China, however many of the wild populations are extremely fragmented.

Snow leopards are a relatively solitary species and are most active at dawn and dusk. They are opportunistic predators capable of killing prey up to three times their own weight. They tend to eat wild sheep and goats, however they will kill livestock as increasingly domestic sheep and goats are displacing their wild counterparts.

Mating season runs from early January to mid-March, when long-drawn-out wailing calls can be heard echoing around mountains. The female usually gives birth to a litter of two to three cubs, which are born with black spots, and become independent from their mother at two years old.