Our pair of Northern lynx arrived at the Park in 2012. The male arrived in March and is called Switch, the female is called Dimma and she arrived in February.

Kits are born each year but will leave our collection as part of the European Studbook Programme.

Our lynx can been seen in the walk round area near the car park. 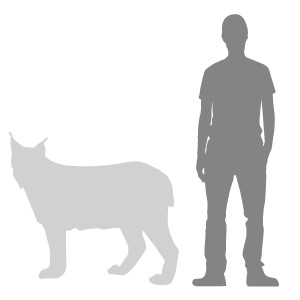 The lynx is a highly adapted carnivore, weighing up to 47 kg and measuring up 110 cm in length, this cat has a short, thick tail with a blunt black tip. The lynx has distinctive dark tufts on its ears, which are thought to act a bit like antennae in helping to locate prey using its excellent hearing. They have a pale sandy-grey to rusty-red colour coat, with indistinct spots. During the winter months the coat becomes much denser and their large paws are covered in long thick hair that provides a snowshoe like effect which helps them travel over deep snow.

Lynx are powerful, stealthy hunters and rely on short bursts of speed to catch prey in a surprise, explosive attack. If the prey has a chance to run, the lynx will rarely chase it. They are capable of jumping 2m in the air to strike at birds, which they flush out and catch in mid-air. However they prefer to eat deer and rabbits.

In the wild, lynx are shy and solitary creatures which do not venture far from the coniferous forests or thick woodland which they prefer. They each have their own range with some males roaming over an area of more than 50 square miles. In mid-March to April, the male leaves its range to search for a mate. The female will give birth to one to four kittens during May to early June. The kittens will stay with their mother to learn necessary hunting skills until the next spring.

The lynx has been reintroduced in other European countries, such as Switzerland, France and Germany.