We have a large mixed group of Japanese macaques at the park.

Our Japanese macaques (snow monkeys) can be seen from the viewing area outside the Visitor Centre and cafe as well as on the pathway down to the Amur tiger enclosure.

In Japan they are the subject of many Buddhist stories and they are the monkeys behind the saying "see no evil, hear no evil, speak no evil".

They are not considered to be globally threatened, but they still face a number of threats including deforestation. Historically, they have been hunted for food, medicinal use or killed, legally, as a pest when raiding crop fields.

The Japanese macaque has officially been protected from hunting since 1947 and is also listed on Appendix II of the Convention on International Trade in Endangered Species (CITES), which means that trade in this species is carefully monitored. 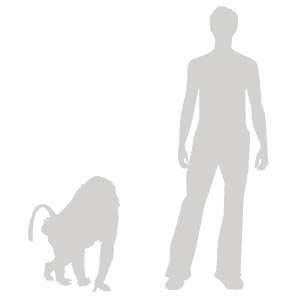 The Japanese macaque or snow monkey is the most northerly living non-human primate.

They are native to Japan, where they are found on three of the four main islands: Honshu, Shikoku and Kyushu living in broadleaf, deciduous and evergreen forests. There is also a population living on Yakushima Island, which is classed as a separate subspecies (Macaca fuscata yakui).

Generally, macaques are medium-sized monkeys with a strong build and stout body. They have long, thick fur which is brown to grey in colour and contrasts with the bare skin of their face and rear. This bare skin is red in adult Japanese macaques. They also have long whiskers and a short tail. Japanese macaques range in length from 47 – 60cm and males are normally heavier than females weighing up to 11kg, while females weigh only 8kg.

Their thick coats help them to survive winter temperatures of -15 degrees Celsius. However, they are probably most well-known, although it is just one group, for the habit of sitting in natural hot springs in order to escape the winter extremes. The macaques of the Nagano mountains are the ones which take advantage of the hot springs, a behaviour which only started in 1963 when a young female waded in to retrieve some food and liked the warmth. Gradually over the years, the whole troop has taken up this behaviour.

Japanese macaques are normally diurnal, which means they are active during daylight hours. They normally spend this time foraging for food, travelling, grooming and resting. They have a varied diet depending on habitat and season, however it is typically made up of leaves, fruit, berries, seeds, small animals, insects and even fungi.

As with all other species of macaque, they live in large social groups known as ‘troops’. These groups can vary greatly in size, with an average troop containing around 40 individuals. Within the troop, the females are maternally related, while males transfer between groups. There is a strict dominance hierarchy, with lower ranking individuals having less access to resources such as food and a young female macaque will inherits her mother’s rank.

Breeding season usually takes place from September till February where the males compete for access to females. Females usually breed between the ages of 6 and 18. After a gestation period of 173 days, a single infant is born.