Our wolves can be seen in Wolf Wood which is located at the far end of the car park near the entrance reserve.

The European grey wolf used to be found throughout much of the northern hemisphere, however today it has a more restricted distribution, although it is starting to expand its range within western Europe. They can be found in a variety of habitats including forests & mountains.

Previously the grey wolf has suffered many years of hunting and trapping for its fur, which has reduced its population. In recent years’ legal protection and land use change has helped some populations to recover. However, some subspecies and regional populations are still at risk as a result of habitat loss and fragmentation.

As a result of the various countries the grey wolf is found in, conservation action and protection is greatly varied. 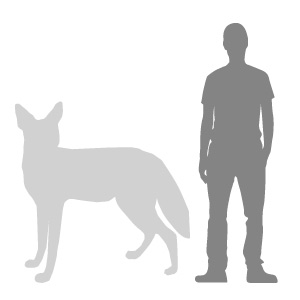 The grey wolf (Canis lupus) is the world’s largest wild canid. In appearance, they resemble a large domestic dog, but they have longer legs, larger feet, a narrower chest and a straight tail. They have thick fur, which has an outer layer made up of coarse guard hairs, with a soft undercoat below. Their coat is generally grey in colour with black flecks and lighter underparts. However different populations can exhibit different colour variations. They also have very sensitive ears and nose to help track down prey.

Wolves are highly intelligent animals with a complex social structure. Almost all pack members are related and this blood tie makes it profitable for the animals to work co-operatively. Pack size is restricted by the size and abundance of food as well as habitat. A fierce hierarchy exists between pack members and breeding only takes place between the alpha male and alpha female (the highest ranking male and female). Should one of the alpha pair die, chaos ensues in the pack as the original hierarchy breaks down and another evolves.

Wolves well down the hierarchy will show submissive behaviour to other pack members. This is characterised by a cringing posture with the tail between the legs. A dominant animal will hold its tail high and will not be usurped by any other member of the pack.

Grey wolves have a varied diet, including reindeer, red deer, elk and wild boar, however smaller animals, livestock, carrion and berries may also be eaten. All pack members participate in hunting and prey is usually pursued in a chase which can last between 100 metres and 5 kilometres. They have keen observational skills to help them identify the individuals that are young, old or in poor health.

Breeding season normally occurs between January and April, and normally only the dominant pair will breed. The female will give birth to a litter of 1 to 11 cubs (typically 6) after a gestation period of 9 weeks. The cubs are raised in a den for the first 8 to 10 weeks. By the next breeding season the oldest offspring from two to three years before will leave the pack and disperse.