They can be found in the main drive-through reserve.

Please find below an excerpt on our elk from our Main Reserve audio guide:

Population are increasing. Last assessed IUCN June 2008. However, as the species was formerly found in the UK, they can be considered as Extinct in the Wild in a Scottish context.

The Eurasian elk (Alces alces alces), together with its close relative the American moose (Alces alces americanus), are the largest living deer species. They are easily recognised with their humped shoulders, broad, overhanging muzzle, and the hanging flap of skin and hair, known as the ‘bell’, which hangs down beneath the throat.

The Eurasian elk have a heavy body, with long legs and a short tail. They have wide hooves, to help them walk over mud or snow. The male is larger than the female, and has antlers, which are initially covered in skin, known as ‘velvet’, which is later rubbed off. The antlers are broad and flattened at the base, with short projecting branches, and are shed each winter and re-grown through the summer. The antlers of Eurasian elk and moose are the largest of any deer species, spanning up to 2 metres across and weighing as much as 30 kilograms.

The Eurasian elk is found in woodland habitats in Northern and Eastern Europe, including Scandinavia, Poland and the Czech Republic, Russia Kazakhstan and China. They tends to prefer damp, marshy habitats close to water.

Elk are most active at dawn and dusk, and feed on a variety of trees, shrubs and herbs, as well as twigs and bark in the winter. The Eurasian elk is a strong swimmer, and is capable of running at speeds of up to 56 kilometres per hour, with their long legs helping them to negotiate deep snow.

For the most part elk are solitary animals but may form small, loose groups during winter. The mating season, or rut, occurs in September and October, when the males compete for females. Births occurs between May and June after a gestation period of 216 to 264 days. Females commonly give birth to twins, which is very unusual for such a large mammal. The young remain with the female for at least a year, and are driven away when the female next gives birth.

It is possible that European elk survived in Scotland up to around 900 AD, with hunting and habitat destruction being the main causes of their extinction locally.

The Eurasian elk has long been hunted for its meat, leather and bone, and is considered a game animal in much of its range, as well as being controlled as a pest of agriculture and forestry in many areas. Elk are hunted extensively for meat in Sweden and, in some areas have even been domesticated for meat and milk. Collisions with vehicles and trains are responsible for a significant number of Eurasian elk deaths, but there are not thought to be any other major threats to the species at present.

The Eurasian elk occurs in many protected areas across its range, and is also subject to intense management in some countries, such as Finland, through hunting quotas. They remain widespread and abundant, and the future of this distinctive large deer is currently thought to be secure. 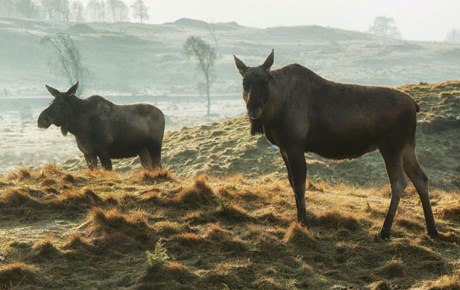