We are currently home to three Eurasian or Common Cranes. A male Hugh, female Leela and their newly hatched chick which will be sexed and named in the coming weeks.

Our Eurasian cranes can be seen in the enclosure behind the Visitor Centre.

Eurasian Crane in the Wild

The Eurasian crane (Grus grus) or common crane is one of the most widely distributed of all crane species. They are a large and impressive water-bird with a long neck, beak and legs. The plumage is mainly slate grey, with black flight feathers. The neck, chin and throat are dark grey to black, with a black forehead and a white stripe that runs from behind the eye, down the neck and to the upper back. Adults also have red patch of bare skin on the top of their head, and the eye is also bright red or reddish-brown. This species are known to make loud, trumpeting and quite penetrating calls. It is a fairly large bird at 115cm tall, with a 180-200 cm wingspan and can weigh between 4.5-5.9 kg.

The Eurasian crane forages during the day, probing with its beak to pick up food from both land and water. They generally eat leaves, roots, berries, insects, small birds and mammals.

All ages and sexes engage in ‘dancing’, which is made up of a variety of bows, bobs, leaps, running, and tossing of vegetation. These are most commonly used in courtship, but are also associated with aggression.

Outside the breeding season, they gather and migrate in large flocks, however during the breeding season, from April to June, each breeding pair requires a large nesting territory. Breeding pairs are monogamous and reinforce the pair bond with ‘unison calling’, a complex series of coordinated calls which are made with the head thrown back and the beak pointed skywards.

The nest, which may be used year after year, is a mound of vegetation, generally placed on the ground in or near water. Both sexes help build the nest and incubate the two eggs, which hatch after 28 to 31 days. The chicks have brown plumage, and fledge at around 65 to 70 days, however they take between 4 and 6 years to reach maturity. Every two years, before migration, the adult cranes undergo a complete moult, which leaves them flightless for six weeks, until the new feathers grow in.

The common crane breeds across Europe and Asia. They are a migratory species, choosing to winter in southern Europe, north and east Africa, the Middle East, India, Pakistan, and southern and eastern China. However, in the UK the East Anglian population is non-migratory.

Although one of the most abundant and widespread species of cranes, the common crane was extirpated from many parts of its range due to habitat loss as a result of dam construction, urbanisation, agricultural expansion, and drainage of wetlands.

This species has managed to adapt to human settlements but nest disturbance, changes in land use, and collision with utility lines are still causing problems. Further threats include persecution due to crop damage, pesticide poisoning, egg collection and hunting. However, despite this the species is now recovering in some western parts where conservation efforts have been made.

The Eurasian crane is legally protected in most of its range and conservation efforts across Europe are coordinated by the European Crane Working Group. With the protection and restoration of suitable wetland habitats, populations have started to return to many of their former breeding grounds, and reintroductions have also been proposed.  For example, in the UK the Great Crane Project is hand-rearing common crane chicks, with the aim of re-establishing a wild breeding population in the Somerset Levels and Moors. 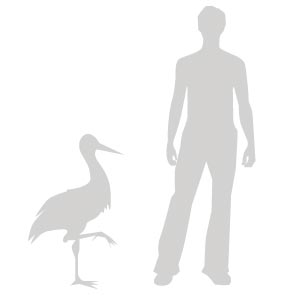