We have a large herd of red deer at the park.

Where to see them:

They can be found in the main drive through reserve. You can either take your own vehicle or enjoy a guided tour with our Main Reserve Tour.

Please find below an excerpt on our red deer from our Main Reserve audio guide:

The main threat to the native red deer populations is hybridisation, or crossbreeding, with the introduced sika deer. Red deer herds are currently culled to restrict the damage they cause to the natural environment. Trophy hunting and hunting for meat (venison) are also common.

As this species is widespread and common, there are currently no conservation action plans, although populations are carefully managed to maintain healthy herds and keep a balance with the natural environment.

Our red deer at the Highland Wildlife Park show all the dynamics of a wild herd and every season of the year brings different behaviours to the fore.

For more information on red deer, look up the British Deer Society website. 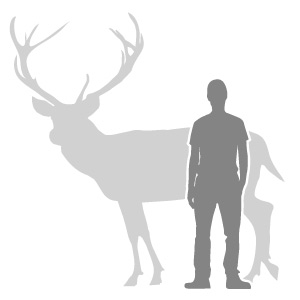 Red deer (Cervus elaphus) are the largest native land animal in the UK and are found mainly in northern Scotland. Stags (males) are larger in size than females, and have magnificent branched antlers that can reach up to one metre in width. In summer, its coat is a deep reddish brown colour, giving the deer its name. In winter, the coat becomes longer, thicker and darker.

Males and females stay in separate groups for most of the year; stags group into unrelated 'bachelor herds', while females (hinds) live in groups consisting of a dominant female and her daughters. They are active throughout the day but tend to be most active in the evening and at night. Their diet consists of shrubs, tree browse, grasses and heather.

In March and April, the stags cast their antlers and start to grow new ones, which are usually larger than those of the previous year. At first the new antlers are covered in soft thin skin called velvet. In July, this velvet dies and the stag rubs it off and sometimes eats it. Antlers take about 100 days to grow. In the Scottish Highlands, stags chew on the old antlers when they fall off. These bony antlers are rich in calcium, which is deficient in many soils of the Highlands. The stags use this calcium source to provide the necessary vitamins for the following year’s antlers.

In late May and June, the calves are born. They are reared by their mothers in the hind herd which is led by a herd matriarch. The mating season, or the ‘rut’, takes place between late September and November. The stags put on weight before the rut in order to sustain the aggressive energy they need to fight other stags for control of the hinds and for supremacy. The fighting is not all physical contact - a lot of it consists of bellowing to warn off their rivals and strutting about in an intimidating manner. Red deer can be found throughout Scotland with very large numbers in the Highlands.

Watch the annual rutting of the deer stags