We have large group of Himalayan tahr.

They can be seen in the main reserve and from the viewpoint at the top of the park.

Please find below an excerpt on our tahr from our Main Reserve audio guide: 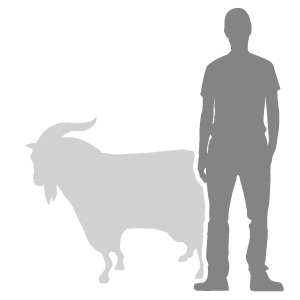 Himalayan tahr (Hemitragus jemlahicus) are specially adapted to life on the rugged mountain slopes of the Himalayas, and their range extends across the Himalayan Mountains, Bhutan, India, Nepal and China. They are native to these areas but they were also inappropriately introduced to New Zealand in 1904 where they have thrived. They live at high altitudes on rugged mountain slopes and wooded hills. During the summer they live higher up in the mountains migrating down in the winter to avoid deep snow and find more vegetation.

They are very well adapted to living in their harsh environment. The tahr has a thick undercoat covered with long, dark brown hair to keep them warm and in the spring their coat becomes thinner and lighter. They are able to move quickly and confidently over rocky terrain, as their hooves are very flexible and rubbery; this also makes them excellent climbers as they can lodge their hooves into small footholds. Males are larger than females but both sexes have horns although the males' are longer, reaching a maximum size of 46 centimetres, which curve back towards the body. Males also have a long, thick ruff, which grows down their neck and shoulders to the tops of their legs.

Himalayan tahr feed on any vegetation they can find and graze on grass, herbs, leaves and plants. They are able to rear up on their hind legs to reach branches, which they then hold down with their front legs so they can eat any leaves available. Like cows, they have a multi-chambered stomach, which allows them to regurgitate their food and chew it over again to get as much goodness out of it as possible. The tahr's day is spent either grazing or resting. In the morning they begin to travel uphill, feeding as they go, until midday when they stop to rest and ruminate for the afternoon before returning back down the slope, again grazing along the way.

Males and females live in separate groups until the breeding season when they come together. During the breeding season, males will compete for mating rights to females. Two males will try to intimidate each other by putting on a display, walking next to each other with their ruffs erect and their heads down to show-off their horns. If this does not see-off an opponent then they will try to block each other's path, and if one does not submit after this then it will result in head butting until there is a victor. The winning male then puts on a display for the female by strutting in front of her holding his head high and erecting his ruff.

After a gestation period of approximately seven months, the female leaves her group to give birth. She will have either one or two young, who are able to stand and walk three hours after birth, and after a few days they return to the group together. The young tahr is reliant on its mother's milk for the next six months after which it can graze on the same food as its parents. Mothers care for their young until they are two years old; males then leave while females remain in the maternal herd.

The Himalayan tahr faces many challenges including habitat loss due to expanding human population, competition from domesticated sheep and goats, over-hunting and military conflicts. There are now many protected areas along the Himalayas for the tahr where hunting is illegal and there are plans to expand these areas. 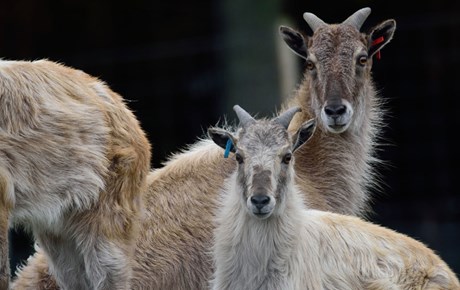