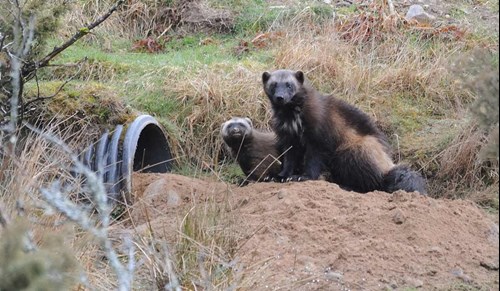 A first in Scotland, wolverine kits have been born at RZSS Highland Wildlife Park. As well as being the first time in Scotland, this is only the third time this vulnerable species has ever been born and reared in the UK. Over the weekend, keepers were delighted to spot a pair of kits running and playing close to the Park’s resident female. There are currently only around 2,300 wolverines left in the wild in Europe and just 130 in captivity.

Vickie Larkin, Carnivore Head Keeper at RZSS Highland Wildlife Park, said: “We were hoping that our female wolverine Tina would give birth this year as we had observed mating last summer. More recently, we hadn’t seen Tina out in her enclosure for some time, which is actually a good indicator that she had possibly given birth and was nursing kits in the den.

“Mirroring the process in the wild, it is often best to leave carnivores like wolverines completely alone for a number of weeks with their young after birth has taken place. Funnily enough, we were just about to check the dens in Tina’s enclosure, as enough time had passed, when I saw a little kit dart from one den to another! We estimate that the twin kits were born around the 7 February and are now almost two months old.”

Powerful animals, it’s not hard to see why Marvel based their Wolverine character on this species with a reputation for ferocity and strength out of proportion to its size. The kits are already half the size of mum. Wolverine kits are born blind and covered in white fur, but the twins now have a coat coloration similar to their mother’s. 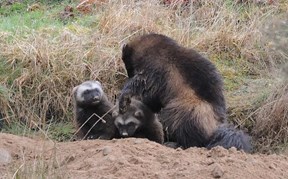 Douglas Richardson, Head of Living Collections at RZSS Highland Wildlife Park, said: “The Park is only the second zoological collection in the UK to breed and rear wolverines, and they do present some husbandry issues which makes any litter reared a relatively unusual event. The European population of wolverines is listed as Vulnerable on the IUCN Red List, so the birth of these two kits will help to bolster the managed population within the overarching breeding programme for this increasingly threatened species.

“Tina, their mother, is fiercely protective of the new kits and they never stray far from her. The kits have not yet been sexed, but as soon as they are keepers will start to think of names for the two youngsters.”

The kits have spent the first two months tucked safely away in the den with their mother, but now that they are a little bit older they have just started to make an appearance outside. Whilst they can only be spotted sporadically popping out of their den, as they start getting comfortable with their new environment they will become more visible over the coming weeks and months.

Wolverine are the largest member of the Mustelidae family, which includes weasels, stoats, badgers and otters. They are tough and powerful animals and are normally found in the Arctic and subarctic areas of Europe, Asia and North America. Wolverines are scarce throughout most of their European range due to over-hunting and diminishing prey populations, which brings them into conflict with humans as they are forced to feed upon domestic livestock. The Swedish and Finnish populations are currently the most secure.