(This will open in a new window)

We want you to have a great visit with us. Please be aware of our terms and conditions before booking:

- Tickets are non-refundable and non-transferable.

- There is no additional charge to view the polar bear

- With the exception of fully trained guide dogs, no dogs or pets are allowed in the Park. For more information including nearby kennel facilities please click here.

- We cannot guarantee that any of our animals will be on show at any one time.

- In extreme weather conditions we may have to close the Park.

- Online ticket purchasers are reminded that for operational, technical, safety or animal welfare reasons any advertised exhibit or attraction or any of the onsite facilities may be closed, removed, altered or otherwise unavailable at any time. the Highland Wildlife Park reserves the right to alter or cancel any presentation or feeding time without notice if required.

- On busy days, visitors to the Park will be guided to park in a particular order so as to maximise available space on site

- Before booking please review our full terms and conditions.

Choose a Webcam
BOOK TICKETS
The fastest way to visit

View all our animals

See all our animals...

Learning at the park

Ways you can support 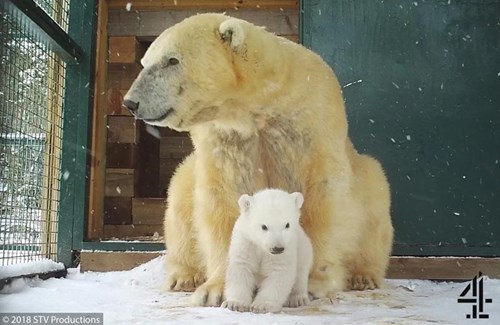 Have you got a question about our polar bears? check out our frequently asked questions below:

When did Victoria give birth?

We cannot say for certain as we do not have sight inside her cubbing box. However, we first heard promising noises on 18 December.

How many cubs has Victoria had in this litter?

We can now confirm Victoria has had one cub in this litter. We were unable to confirm this earlier because we didn’t have sight inside Victoria’s cubbing box.

Why were you not able to see inside Victoria’s cubbing box?

We placed a camera within the ceiling of the cubbing box prior to the mating season. Unfortunately, the camera was knocked out of position by Victoria’s movements and was no longer able to operate. Once Victoria entered the den we deliberately took a hands off approach so as to not risk disturbing her or her offspring.

How much do polar bear cubs weigh?

New-born polar bear cubs weigh little more than a guinea pig – up to around 700 grams.

What do they look like and can they see at birth?

New-born polar bear cubs are around 30cm long with very fine hair, which makes them look hairless. They are blind at birth and only open their eyes when they are a month old.

When will you know the gender?

We will continue the approach we have taken up until now so will not be ‘hands on’ with Victoria’s cub for another few weeks to give both mum and cub all the privacy and time they need. All being well we will learn the gender during the cub’s first routine health check which will take place around  4 weeks after emerging from the den.

When will you choose a name?

We will choose a name when we know the gender, around April or May.

Does Victoria eat whilst she is in the den?

Victoria last ate on the 10th of November before giving birth in December. In the wild polar bear mothers usually go four to six months without eating, depending on where in the Arctic they live.

Victoria will probably next be fed when the cub is around 60 days old (end of February) and we will start with just a few carrots.

What does the polar bear cub eat?

In their den, cubs drink their mother’s fat-rich milk to grow quickly, weighing around ten to 12 kg by the time they leave their den.

When Victoria and the cub emerge from the den the cub will begin to nibble at food when Victoria is being fed meat and fish. Cubs in the wild continue to nurse once they have left the den but also learn to eat by watching their mother.

How can I see Victoria and her cub?

Victoria and her cub are currently not visible to the public. Please keep checking our website for updates.

We are expecting to be extremely busy over the coming months, especially once our cub is on view to the public. To avoid disappointment and to take advantage of our online discount, we would advise visitors to book in advance online before travelling to ensure entry. We will provide updates regarding when visitors will be able to see our polar bear cub and the release of tickets for Easter soon.

Where did Victoria and Arktos come from?

Arktos arrived at the Park in April 2012 from Hanover Zoo in Germany. Victoria arrived a few years later in March 2015 from Aalborg Zoo in Denmark.

Have Victoria and Arktos had cubs before?

Victoria previously reared a cub, called Milak, at Aalborg Zoo in 2008. This will be Arktos’s first offspring.
Will Arktos meet the cub or become involved in parenting?

No. As happens in the wild, male polar bears don’t have any involvement with their offspring.

When was the last polar bear born in the UK?

The last polar bear cubs born in the UK were twins at Flamingo Land in Yorkshire on 8 December 1992.

Why is RZSS breeding polar bears?

Polar bears are listed as vulnerable on the International Union for the Conservation of Nature’s Red List and are under increasing threat due to the loss of their natural habitat because of climate change. The reduction in sea ice, the polar bear’s primary seal hunting platform, is predicted to significantly reduce polar bear numbers over the next 40 years. The breeding of polar bears is part of the co-ordinated European Endangered Species Programme (EEP) within EAZA – no one zoo can undertake this effort on its own.

Will Victoria’s offspring stay at the Highland Wildlife Park?

Our polar bears are part of the European Endangered Species Programme (EEP) and we hope our new arrival will go on to reinforce the captive population, which may be needed in the future to augment and help restore a markedly reduced and fragmented wild population. As would be the case in the wild, Victoria’s offspring remain with her for two to three years, before moving on to another collection. The location will be decided by the European Endangered Species Programme polar bear co-ordinator and the species committee, of which our Head of Living Collections Douglas Richardson is a member. 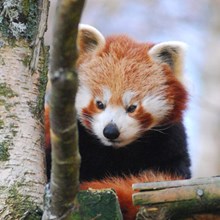 Adopt an animal Find out more
Book your trip today!

Plan ahead with our booking Wizard

The fastest way to visit