We currently have a male musk ox called Myse, that arrived at the Park from Sweden in 2012.

Our musk ox can be seen from the viewing platform near the tiger enclosure, on the path out to the female polar bear enclosure. 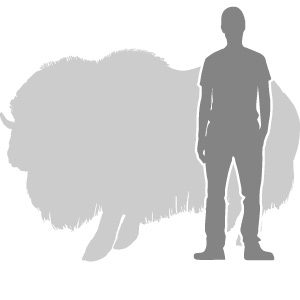 The musk ox (Ovibos moschatus) is an Arctic mammal that lived during the last ice age beside the woolly mammoth. They have an extremely thick coat which is a mixture of black, grey and brown hairs. Their coat consists of two parts, long course outer hairs, called guard hairs, which almost reach the ground and a soft dense undercoat called qiviut. Qiviut wool is highly prized for its softness, length and insulation. It is said to be eight times warmer than sheep’s wool.

They primarily live in Arctic Canada and Greenland, but there are also re-introduced populations in Alaska and Siberia where they had become extinct by the end of the 19th century. A small population has also been established in Norway. Males emit a strong odour that helps to attract females during the mating season which occurs during late August to October. Females have a calf every year after an 8 month gestation period and calving takes place between April and June.

Musk ox are herd animals that are more closely related to sheep and goats rather than oxen. Both sexes have long curved horns which don't stop growing. They can live up to 20 years and survive on a diet of grasses, Arctic willows, woody plants, lichens and mosses. An adult male can weigh up to 300kg and a female 200kg, their main predators are Artic wolves and occasionally polar and grizzly bears.

The world population is estimated at between 80,000 and 125,000 and they represent a significant conservation success story, although climate change may reverse this.