We currently have two great grey owls in our collection. A male, named Edwin, who arrived in September 2011 and his daughter.

Our great grey owls can be seen in the enclosure next to the woodland walk. 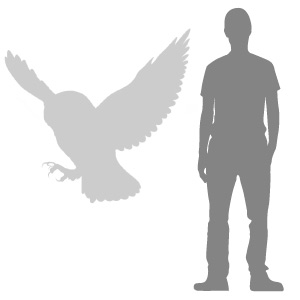 The great grey owl (Strix nebulosa) is found throughout Northern Europe, Northern Asia and a significant proportion of North America. They are quite large birds, rivalling the Eurasian Eagle Owl in size. The great grey owl has a large, rounded head and yellow eyes, with light underparts mottled with darker grey feathers. Their wings and back are darker grey with lighter bars.

Their diet consists mainly of small mammals and their preferred prey is voles, however they will also eat gophers, weasels, squirrels, rabbits, rats and mice. They nest in dense coniferous forests in most of the northern hemisphere.

The female will lay between two to six eggs at one- to two-day intervals. The female does all of the incubation, which starts when the first egg is laid. After four to six weeks the chicks hatch. The male provides all the food for the young, which is torn into smaller pieces by the female. When food is scarce the female great grey owl will often starve herself in order to feed her chicks, and may lose up to a third of her body weight. The chicks will leave the nest after approximately a month and can fly well after two months. The young stay close to home and are cared for by the female for some time after leaving the nest. 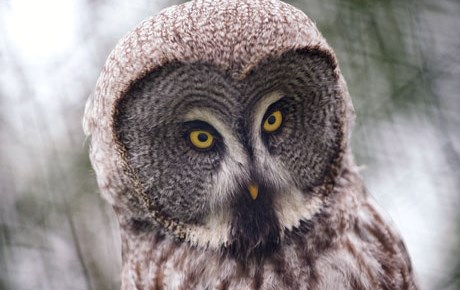