We have a small herd of domestic yak

Our yak can be seen in the Entrance reserve or from the walkway through it. 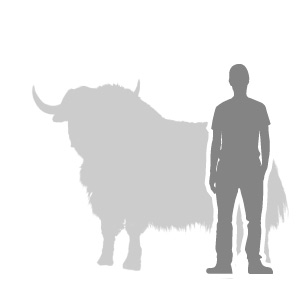 Domestic yak are classified by IUCN as least concern, however the wild subspecies listed as Vulnerable

There are over 12 million domestic yaks (Bos grunniens) in the world, while the wild yak (Bos mutus) population is thought to number much less, 10,000 to 15,000.

Unfortunately, wild yaks are becoming rarer in their Himalayan home range because of hunting and hybridisation with domestic yak. This hardy animal can live at up to 18,000ft (5,400m) and has a dense, matted undercoat which keeps it warm. Yaks do not like warm places but can easily tolerate temperatures of -40° C.

Yak are quite stocky animals with, high, humped shoulders and a broad head. Both males and females have horns, which grow out of the sides of the head and curve upwards halfway along their length. For protection against the extreme cold of Tibet, yaks have a dense undercoat of soft, closely-matted fur, covered by dark brown, long and shaggy hair that almost reaches the ground. The legs are relatively short and have broad hooves that are slightly splayed to aid walking through thick snow. Domestic yak are smaller than wild yak.

The yak is one of the most important domestic animals in Tibet, where it provides transport, meat, milk, fibre for spinning - even its dried dung is used as fuel. In spite of their shaggy, awkward appearance, yaks are excellent, sure-footed climbers.

Yak feed mainly in the morning and evening, grazing on grasses, herbs and lichens, and eating ice and snow as a source of water. However due to the lack of vegetation where they live, wild yaks have to travel far in order to eat enough. In July, they move to lower altitudes and then, as the temperature rises in August, they head back up to the plateaus. Domestic yaks cannot "moo" - only grunt, hence their Latin name "Bos grunniens" which means "grunting ox".

Wild yaks tend to gather together. Females reach sexual maturity at three to four years, although full size is not reached until six to eight years. Mating takes place in September and single calves are born from April to June, after a gestation of 260 days. The young are weaned before they are one year old, but females will not give birth again for another year.

Wild yaks are hunted commercially for their meat but also suffer from habitat loss, cross-breeding with domestic yaks and disease. In China the wild yak population has been protected and the large Chang Tang Reserve provides real protection for the remaining wild yak. 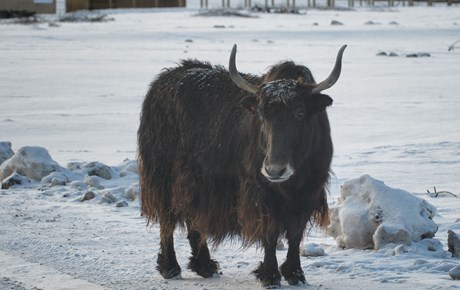