We currently have two female capercaillie in the collection.

The main threats to the capercaillie are the loss of habitat through overgrazing by sheep and deer, predation, and collisions with deer fences. Over-shooting may also be a contributing factor, and a run of poor summers has affected the number of chicks surviving.

Deer fencing is a relatively recent threat as the fences must be tall enough to restrict the movement of deer and as such present a serious threat to a low-flying, heavy bird like the capercaillie. Nearly a third of the total population of birds were lost as result of collisions with deer fencing and so new management techniques are now being trialled to reduce the number of fence collisions.

The capercaillie is listed in the UK Biodiversity Action Plan. In 2016 the population was estimated at just 1,200 which is far from the current target of 2,000 by the year 2020. Conservationists hope that, as a result of improved habitat management, predator control and the removal or marking of fences, this glorious bird will remain a characteristic feature of the Highlands for years to come. 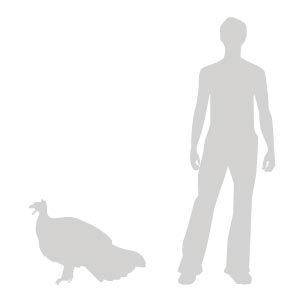 Capercaillie (Tetrao urogallus) are the largest member of the grouse family.

The male capercaillie is a game bird, which some people say resembles a turkey. The males are slate-grey over most of their bodies, with reddish-brown upper wings and a white shoulder. The head, neck and breast have a blue sheen, and the eye is surrounded by a ring of bright red skin. Male birds have a ‘beard’, which is most noticeable when they are displaying, and a long tail, held upright and fanned out during their displays. Females are much smaller birds and lack the colourful plumage of the males. In fact, they often resemble other female members of the grouse family, but are larger in size.

During the Spring the males move to an open part of their territory to perform a spectacular display during which they produce a series of odd calls, known as a ‘lek’ as part of their courtship display. Lek is an Old Norse word which means ‘to dance’.  During the lek the males strut about with their tails fanned out, and wings positioned downwards, all the while producing an extraordinary sequence of noises, some people say they sound like corks being popped from champagne bottles. Sometimes, several males will gather at a lekking site and fights can break out, during which some males can be seriously injured or even killed.

The female usually lays between 5 and 12 eggs, in a nest on the ground, lined with pieces of nearby vegetation. Incubation is between 26 to 29 days and the young chicks, like those of all game birds, leaving the nest with the female the day after they hatch. They stay as a family throughout the rest of the summer months, joining larger groups of birds in the autumn.

Capercaillie commonly feed on blaeberries (also known as bilberries), shoots, seeds and mainly pine needles in winter. The chicks are fed initially on insects, but will gradually move to the more vegetable-based adult diet later.

The Scottish population of capercaillie is limited largely to pine forests, in particular the old Caledonian Forest habitat. They will tolerate man-made plantations as long as they provide suitable feeding and ‘lekking’ sites.

As a result of wide-scale forest clearance and hunting, the capercaillie became extinct in Britain in the 18th century. In the 19th century birds from Sweden were re-introduced into Scotland and their current range is within the Cairngorm region but extends westward around Loch Lomond and northwards to Speyside.

The Scottish birds represent a very small percentage of the world population, which extends through regions of Scandinavia, central Europe, northern Asia and Siberia. Unfortunately, as a result of forest clearance this range is also declining. 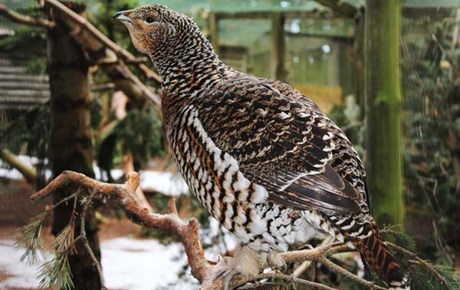